Astrology of A Vision III: Six Attempts at an Astrological Reading

Marilyn Busteed, Richard Tiffany, and Dorothy Wergin were the pioneers of taking A Vision astrologically (in print, at least) and there is an exploratory, tentative tone to the work, characterized by the suggestion of three different methods to allot the phases. They offer equal "lunar" phases, unequal "solar" phases, and symmetrical, centred "lunar" phases.


"There are 28 phases to equal the average number of days in the lunar month. 360 degrees divided by 28 yields 12.86 degrees per phase, a number roughly equal to the daily average motion of the moon. There are two methods of division.... This equal-phase method is the lunar method.
"Since Yeats never designated [un]ambiguously how to divide the cycle into 28 portions, we have developed a method of division based on close correspondences between the phases and the signs of the zodiac.... This is the solar method of division." (p. 36)

This solar method allots a 30° sign to Phases 1, 8, 15, and 22, while the other phases receive 10° each, which is actually Yeats's standard alignment with respect to months and zodiac—in one place, he claims that it "is classification not symbolism", but it is used to map the phases to the gyres of history and the cycles of time in general (see this earlier post on the topic). Note that the alignment of the phases to the zodiac used by Busteed, Tiffany, and Wergin (BTW) is totally different from any of those used by the Yeatses (more on this in a later post) and that it does not with the physical zodiac, being anchored on the position of the New Moon.

The authors actually mainly use the "solar" method of division, establishing correspondence between signs of the zodiac and, where relevant, the threefold divisions of the zodiac signs, the decans (using triplicity rulerships).
(The third possible form of division, a variation of their lunar, equal division, is kept to an appendix: Phase 1 is centred on the conjunction of sun and moon [new moon], rather than starting with it, so Phase 2 starts at 6° 26' [6.43°] after the new moon's position.)

The next treatment chronologically is that of Ann Rogers in the journal Metapsychology, but I'll leave it till the end as it is not book length and divides differently from the other methods.


Martin Goldsmith acknowledges and follows on from BTW:


"Since Yeats' system has twenty-eight phases, with no indication that any one phase is more important than any other, the most obvious method of division would be twenty-eight equal phases of 12.86 degrees each. The authors of Phases of the Moon [BTW], however, also developed a more complex system, which they termed the 'solar' system of division. It contains twenty-four small phases of 10 degrees each, and four large phases of 30 degrees each....
"Approximating the angle between the Sun and Moon, I arranged these examples into 'solar' and 'lunar' phases, looking in particular to those areas around the expanded solar phases, since these are the areas of greatest discrepancy. The results of my study strongly supported the 'solar' system of division....
"Perhaps the most exciting discovery presented in Phases of the Moon is the correlation between the Moon phases and the signs of the zodiac. The relationship is so solid that it would be no exaggeration to compare it to the age-old correspondence between the zodiacal signs and astrological houses." (pp. 19–20)

Goldsmith therefore follows BTW in making the phases correspond to signs and decans, but prefers to establish his own planetary associations and "rulerships"—


"Since the decanate rulers have proven unreliable, I haven't tried to tailor my phase descriptions to the traditional decanate system. The planetary 'rulers' that I have given each phase are meant to describe the kinds of energy one finds in that phase; they are not meant to establish some new system of rulership. In fact, I have often listed two or more planetary influences for one phase" (p. 22).


Dave Wilkinson also mentions BTW's Phases of the Moon and appears to refer to Goldsmith's work in rather mangled fashion as "Michael Golman's 1988 Moon Phases". He, however, follows BTW's lunar method. He gives no description of the division methods or the mathematics, just a table with rounded values based on 360 ÷ 28.

"From your natal horoscope, determine the number of degrees the moon lies ahead of the sun. Each Phase is approximately 13 degrees. Phases 1, 8, 15 and 22 are at the quadrants.


Wilkinson uses the Four Faculties far more than the earlier writers, and in that sense is significantly closer to Yeats, although he simplifies to some extent and invents meanings for the Faculties of Phases 1 and 15. He does not give any zodiacal connections or interpretations.

Bob Makransky follows the same route. He also divides the Wheel into twenty-eight equal sectors (BTW's "lunar" scheme), starting with the New Moon, and he does not align them with the zodiac. Instead he places the seven phases in each quarter under the rulership of one of the ancient planets, the sun, or the moon, following what is known as the Chaldean order, based on speed of apparent motion. Thus in each quarter, the cardinal phases are assigned to the sun, followed by Venus, Mercury, and the moon for the first triad, then Saturn, Jupiter, and Mars for the second triad. Makransky focuses on the Daimon and pays attention to the Faculties, using some manuscript and draft material.

Shirley J. Self also uses what BTW term the lunar division, giving the exact degrees, minutes, and seconds that are rounded by Wilkinson (12° 51' 26"; 25° 42' 51"; 38° 34' 17"; and so on). Like Makransky she pays attention to Daimonic dimensions as well as the Faculties in her analyses and even sketches thePrinciples, giving greater attention to the automatic script and drafts of Yeats's "Vision" Papers than any of the others.

Ann Rogers is the exception in this group in that my knowledge of her work is confined to a pair of magazine articles and, far more importantly, she does not envisage souls being born at either the New or the Full Moon:


"Presumably we do the system no violence by attempting that transformation in as straightforward a manner as possible: simply eliminating Phases 1 and 15 and making the wheel begin at Phase 2 and end at Phase 28. The 360 degrees that comprise a full circle will be divided by 26, allotting each phase 13°50.76'—a figure that gives this degree-division of Yeats' wheel some empirical justification, since the moon's daily motion through the Zodiac varies from 12° to 14°. The angular distance in degrees between the sun and moon in people's horoscopes can then be compared to the degree division of Yeats' circle, letting us give our own real-life examples with each phase.
"Yeats dealt with the system's ambiguity through no such angular measure. He assigned examples to each phase mainly by guesswork. Only when he knew a person's horoscope could he try to place the person in the empirically correct phase. In fact, Yeats assigned to many of his examples phases that were nowhere near the actual astrological moon phases under which they were born.
"Obviously, precise calculations had no place whatsoever in Yeats' work. Because he never divided his phases into degrees, he had to estimate even when assigning phases to people whose horoscopes he knew." (pp. 4–5)

Like some others, she assumes that Yeats was probably aiming for astrological accuracy but was too unfocused to calculate a chart even roughly—willing to put years of effort into redrafting explanations of the system, but unwilling to spend a few hours to assign the phases adequately.

The three systems proposed are put together in a diagram below. Though the differences are fairly clear, and depending on the size of your screen, it may be difficult to see any detail, so there is a larger version available to download. 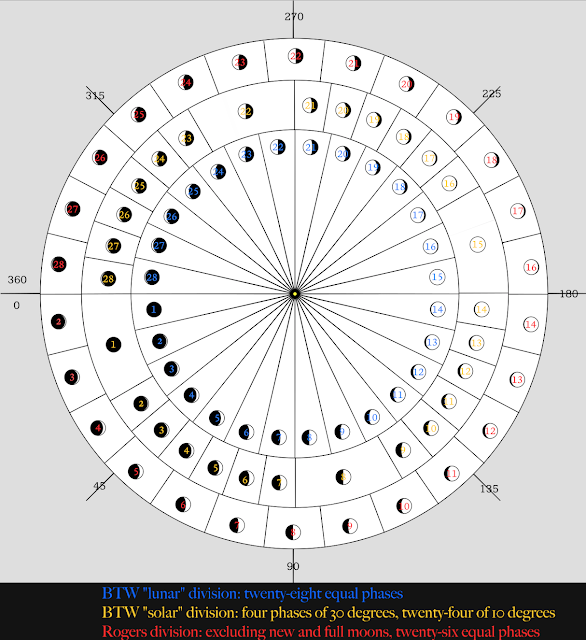 Bringing the systems together underlines how the "obvious" way of applying A Vision's phases of the moon still requires judgment calls as to how exactly it might work. Certain angles allocate significantly different phases in the three division systems (for instance, at various points shortly after the new and full moons), others are very similar in all (just before the new and full moon), and most are just a little different. Yeats's moon, at 237 degrees away from his sun, is at Phase 19 in the lunar scheme, Phase 18 in the solar, and Phase 19 in the 26-phase scheme—it's just about feasible to think he was being careless in assigning 17 to himself. However, George Yeats's moon, at 312 degrees from the sun, is assigned Phase 25 in the lunar and 26-phase schemes, and 24 in the solar, all a long way from the Phase 18 that the Yeatses themselves used.

Astrology of A Vision I

Astrology of A Vision II

Astrology of A Vision IV

Astrology of A Vision V