Today is the Feast of Epiphany, commemorating the arrival of the "wise men from the east" in Bethlehem, bearing gifts of "gold, and frankincense, and myrrh" (Matthew 2:1–11). This story is given in the Gospel of Matthew, while most of the other elements—no room at the inn, the manger, and of the adoration of the shepherds—are drawn from Luke (the ox and the ass are later additions to the legend). Though many of us have become used to the fusion of the two—mainly through the hymns or readings associated with Christmas and the tradition of the nativity scene or crèche—in art, most of the old masters represent the adoration of the shepherds and the adoration of the Magi (kings or wise men) separately.

Yeats takes these two adorations as archetypes. In the notes to The Wind Among the Reeds (1899), he characterizes three speakers of the collection's poems:* "'Michael Robartes' is fire reflected in water", "Hanrahan is fire blown by the wind", "Aedh ... fire burning by itself". Yeats then goes on: 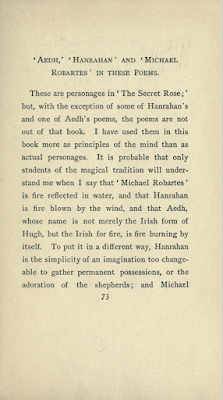 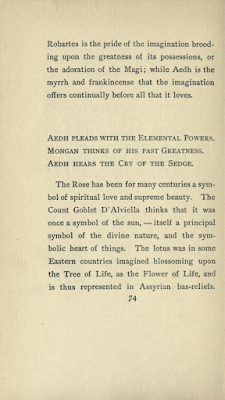 The Wind Among the Reeds (London: Elkin Matthews, 1899)

Yeats says that "It is probable that only students of the magical tradition will understand" the elemental attributions, and it is clear that he is drawing upon symbolism that includes the astrological fire, associated with intuition and imagination, while water is associated with emotion and air with intellect. He links Hanrahan and Robartes further to the idea of possession—a more earthy association, but imaginatively as much the possession of learning—and to the idea of two different revelations: the unexpected angel appearing to the shepherds in their fields, opposed to the studied revelation of the star that leads the wise men to Judea, where it is then related to written prophecy. Neither revelation is better, and though the unburdened spontaneity of the airy imagination might seem superior, the dedicated mission of the Magi is an important part of the mystery too. What the shepherds may have gained by simplicity of heart, the Magi have gained through great learning, but both have arrived at the same truth.


Yeats wrote his own story "The Adoration of the Magi" at much the same time (1897), and his three old brothers from the western islands of Ireland have qualities of both the shepherds and the Magi. Simple countrymen, they are inspired by a voice to visit Paris, in search of a place where they finally find a dying prostitute. The god Hermes speaks through one of them and tells them to bow down and hear “the secret names of the immortals” that “the immortals may come again into the world” (Variorum Secret Rose 168var; see Mythologies 2005 424n13), and the dying woman appears to give the secrets of religious mysteries, such as those Yeats was attempting to create at Lough Key: “she told them the secret names of the immortals of many lands, and of the colours, and odours, and weapons, and instruments of music and instruments of handicraft they held dearest; but most about the immortals of Ireland and of their love for the cauldron, and the whetstone, and the sword, and the spear, and the hills of the Shee, and the horns of the moon, and the Grey Wind, and the Yellow Wind, and the Black Wind, and the Red Wind” (VSR 170var). When Yeats revised the story in the 1920s, while he was writing the first version of A Vision, instead of these revelations of these ancient secrets, the dying whore gives birth to a unicorn, though the birth is unseen and supernatural and recounted by Hermes.


The revelation comes differently, but the import is ultimately the same—the advent of a new religious dispensation, which is first glimpsed by those who have the gift of grace or the result of preparation.

When Yeats looked back on his days in the Golden Dawn of the 1890s, he recalled:


We all, so far as I can remember, differed from ordinary students of philosophy or religion through our belief that the truth cannot be discovered but may be revealed, and that if a man do not lose faith, and if he go through certain preparations, revelation will find him at the fitting moment. I remember a learned brassfounder in the North of England who visited us occasionally, and was convince that there was a certain moment in every year which, once known, brought with it "The Summum Bonum, the Stone of the Wise." But others, for it was clear that there must be a vehicle or symbol of communication, were of the opinion that some messenger would make himself known, in a railway train let us say, or might be found after search in some distant land. (AVA x–xi, CW13 liv)

*Four names actually feature in the poems' original titles—Mongan is the fourth—alongside "the Poet"; these were later changed to a generic "He..." or "The Lover...".