Jaff Seijas: Images for the Emblems of the 28 Phases

The artist Jaff Seijas recently contacted me, drawing my attention to a group of paintings he has created for the 28 phase emblems that the Yeatses drew up from the automatic script. There is plenty more to be said about these, and I hope to get round to it, but want to share the paintings on their own first. I've added some of the pictures to the webpage where I touch on the emblems—Phase Symbols—and am posting a different selection here, with Jaff Seijas's kind permission. Go to his website at jaffseijas.com to see the full set of images. I know from writing about the phases and preparing web materials that going through all twenty-eight of them can sometimes become a little tiring, and realize that some of the images are probably less inspiring than others, so I can only add thanks that he has taken pains to illustrate the full set. Most of the emblems have relatively brief summaries, but a few have fuller descriptions, either  in the card index (S66), or in a workbook that sadly does not seem to be published (a short section on Phase 1 is quoted in George Mills Harper's The Making of Yeats's "A Vision" and passages are supplied to fill in gaps in other manuscripts).

For Phase 1 itself, this last image would probably be rather simpler, since, as Harper notes, "this confusing exposition combines imagery from several Phases". The paragraph is quoted without context in The Making of Yeats's "A Vision" and is not included in Yeats's "Vision" Papers, so it is difficult to be sure exactly what Yeats was doing, but it appears to be an attempt to evoke a vision of Phase 1 within the context of the Wheel.
• The figure of Phase 1 is that of the man hanging from the tree, probably with the snake included. Yeats notes that the evocation is not luminous as true visions tend to be, and not easy to move  or develop from but obsessive.
• Phase 1 is located at cardinal North, and the man looks towards "the Initiate": this term came into the script very early and is ambiguous, as it may refer to the last phases, (especially Saint and Fool), or go beyond cycles to the centre of the Wheel (linked to avatars and Christ).
• It is difficult to see how the "figure weeping into a cup" can be both at N and a good deal to left of a figure at North. It could well be a misreading of the rather N-like glyph for Capricorn (♑), which would make sense, since this is the marker for "Loins" placed in the fourth quarter, usually shown between Phases 25 and 26. (This ties in with the description of Phase 18 on card S66, where it is noted that the "Legs go to ♈" i.e. Aries, the zodiac sign marked on the Wheel between Phases 18 and 19.)
• The elements of the weeping woman with the cup and the boar with cup both seem to come from Phase 24, even though they are referred to as being opposite one another.
• Whether these are left or right seems moot, and it is probably best not to place too much emphasis on this aspect.
• East is identified in the normal arrangement with Phase 22 and the other figure with the whirling leather thong appears to be the emblem associated with Phase 22. 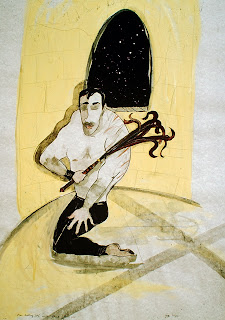 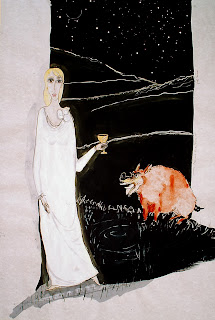 •The "back of an eagle" does not tie in exactly with any symbol, though eagles figure in the emblems for Phases 3 and 9, and a "bird of prey" in Phase 8. The figure of Phase 22 may therefore be standing on an "opposite" figure.

Without more context, it is difficult to tease out exactly what the vision communicates. As it stands, it seems like a rather cluttered hybrid of Odin sacrificing himself on the World-tree and Alice in Wonderland. Yet the imagery is clearly part of Yeats's phantasmagoria, with descriptions of these images recurring in the description of Speculum Angelorum et Hominum and the woman with the cup figuring in Yeats's own bookplate. 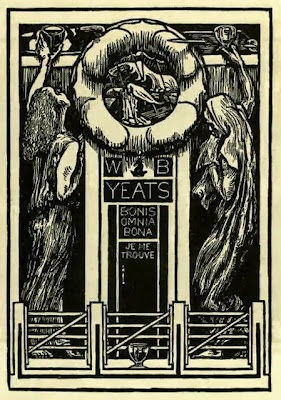 Finally, apologies for the long hiatus in posts--I aim to be a little more regular but won't tempt fate by promising anything!
Posted by Neil Mann at 6:15 PM 2 comments: