The Unicorn and The Lightning-Struck Tower II

Alexandria's was a beacon tower, and Babylon's
An image of the moving heavens, a log-book of the sun's journey and the moon's;
And Shelley had his towers, thought's crowned powers he called them once.

I declare this tower is my symbol; I declare
This winding, gyring, spiring treadmill of a stair is my ancestral stair;
That Goldsmith and the Dean, Berkeley and Burke have travelled there.

It needs no great familiarity with Yeats's work to recognize the importance of towers as a recurrent symbol in his work. There are many influences that contribute to this:
the towers of myth, legend and history—whether Nimrod's tower at Babel or Babylon's ziggurats for watching the heavens, the lighthouse at Alexandria, one of the wonders of the ancient world, or the round towers in Ireland's historic landscape, such as those at Glendalough and Cashel.

Added to these are also important literary influences, most notably Shelley's poetry, as well as Milton's 'Il Penseroso', which inspired a series of engravings by Samuel Palmer. All of these are evoked when Yeats has his fictional characters of Michael Robartes and Owen Aherne arrive at the foot of Yeats's own tower-house at Thoor Ballylee, Gort.


We are on the bridge; that shadow is the tower,
And the light proves that he is reading still.
He has found, after the manner of his kind,
Mere images; chosen this place to live in
Because, it may be, of the candle-light
From the far tower where Milton's Platonist
Sat late, or Shelley's visionary prince:
The lonely light that Samuel Palmer engraved,
An image of mysterious wisdom won by toil;
And now he seeks in book or manuscript
What he shall never find.

With the purchase of Thoor Ballylee, Yeats was deliberately embodying a symbol in stone and mortar with a title deed. The first property Yeats had ever owned, it stood close to Augusta Gregory's house, Coole Park, and though he had bought it before his marriage to Georgie Hyde Lees, it became a sort of present to her and a statement of their marriage. He sees it as a representation of friendship and love, when he notes how he:


For an old neighbour's friendship chose the house
And decked and altered it for a girl's love,
And know whatever flourish and decline
These stones remain their monument and mine.

Ezra Pound viewed it with less romantic embellishment, referring to as Yeats's 'phallic symbol on the Bogs. Ballyphallus or whatever he calls it with the river on the first floor' (in a letter to John Quinn, 24 March 1920, in Reid, The Man from New York, 419). 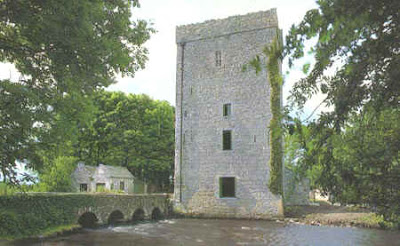 Ironically, therefore, when Yeats has Robartes and Aherne talking on the road next to his house, he makes Robartes a liar, for if they had seen a light at the window, Mr. Yeats was almost certainly not alone and seeking wisdom in a 'book or manuscript' but rather engaged with his wife in the strange form of inspired communication involved in the Automatic Script. This new wisdom may be expressed in geometrical terms but it comes not from the mysteries of ancient texts, rather from the wisdom of the body:


The signs and shapes;
All those abstractions that you fancied were
From the great Treatise of Parmenides;
All, all those gyres and cubes and midnight things
Are but a new expression of her body
Drunk with the bitter sweetness of her youth.

The tower occurs with some frequency in the script and it kept recurring in complex sketches along with birds, butterflies, cliffs, hands, water and trees. Apparently, at one point the Instructors prompted a stay in Glendalough, and Yeats asked if this was because of the round tower, to be told gnomically that it was there 'To put in your mind for a purpose' (20 March 1918, YVP1 395). While there, the Instructors agreed when Yeats asked if the tower was a symbol of the Passionate Body (YVP1 394) and antithetical (YVP1 396, though this may refer only to the Glendalough tower). This makes a good deal of sense, insofar as the tower is a natural symbol of isolation and the antithetical is what seeks to divide the individual from others, and is founded at the level of the Principles in the Passionate Body, the vehicle of emotion and love (developed further in Oxford the following year, YVP3 50–51). In A Vision B, Yeats writes of how 'the Celestial Body is a prisoner in a tower rescued by the Spirit' (AVB 189), while in a draft for A Vision B, he contrasts the divine dimension, 'the sphere itself, that which only contradiction can express,' saying that it is'not "the lone tower of the absolute self" but its shattering, "the absolute self" set free, that unknown reality painted or sung by the monks of Zen' (NLI 36,272/12; & cf. 36,272/22). Here the tower represents very much the antithetical separation of the individual soul, while the Sphere is its opposite, the shattered tower, where the absolute self, probably the Ghostly Self, is freed of the tower of the 'lower self': the body, the personality and the emotions.

On a personal level, however, both Yeatses were in antithetical incarnations, so it was their natural mode, and the tower also hints at the structure they were building both in terms of the system and their marriage. While they were in Glendalough, they were told that 'The tower is incomplete' with advice to love the natural life, and that 'the tower is not joined' followed by a picture of a tower with a crack down the middle (24 March 1918, YVP1 399). At one stage, one of the Instructors opened a session with the admonition: 'Do not forget that the Tower is still your symbol | In all lives', though even Yeats seems to have wondered 'In what way am I in danger of forgetting' (15 September 1919, YVP2 427)? However, at other times they were told that, possibly as a protective symbol, the tower was more George's emblem than his (15 January 1918, YVP1 257; 28 October 1918, YVP2 102).  'You', of course, is ambiguously singular or plural, and in many ways the tower often seems to represent the relationship or partnership.
There also seem to have been personal rituals involved, as when Yeats was told 'tower tower you' (expanded by the editors of YVP to 'you[r thought]' for no obvious reason; 19 March 1918, YVP1 391) or one Instructor signed off, 'Goodnight | Yes | tower symbol over her' (6 November 1919, YVP2 475). Another evening they were counselled to ask only 'a few questions but build the tower & gild the sun | the moon is cold and worried and nervous and needs plenty of sun and quiet — nervous' (the part about the moon is in mirror-writing, which seems to have been used mainly when the message was meant to by-pass George; 2 November 1918, YVP2 108). Whether this was esoteric ritual or simply conjugal advice couched in symbolic language, it is clear that there is much to the Automatic Script that was a private language and involved at least as much that was unwritten as was written.

One sketch from 19 August 1920 brings together a tower with water, apple trees and flowering trees as well as birds and a unicorn (labelled, on the right-hand side), said to be carrying a mask from a tree with its horn and “Rushing” (YVP3 37). The two sets of trees are labelled apple trees and flowering trees, which may represent the same contrast of flower and fruit that Dulac used in his woodcut of the Great Wheel. But elsewhere in the Automatic Script, the tree is the symbol of the primary and the mask of the antithetical, so that the unicorn's carrying away may represent a temporary triumph of the antithetical or rescue for the antithetical Yeatses, as they build the tower of their antithetical system.


I do not know what my book will be to others — nothing perhaps.  To me it means a last act of defense against the chaos of the world; & I hope for ten years to write out of my renewed security. (letter to Edmund Dulac, 23 April [1924]).

The important thing is the meaning of the tower, both in building and destruction, is also key to the Tarot image as seen by the Golden Dawn, and therefore, I think, to the image used for George Yeats's bookplate. But before moving on to that, in the next post I shall look at the Daimon and the Lightning Flash.

The tower remains probably Yeats's most public and amongst his most recognized symbols, and he regarded it as linked to the system, but independent of it and comprehensible as a symbol without it:


In this book and elsewhere I have used towers, and one tower in particular, as symbols and have compared their winding stairs to the philosophical gyres, but it is hardly necessary to interpret what comes from the main track of thought and expression.  Shelley uses towers constantly as symbols....

Fascinating seeing how much there was to this symbol. I'd always thought it was fairly straightforward! And it is, but there's definitely more to it than I'd realized.