Dulac and the Great Wheel 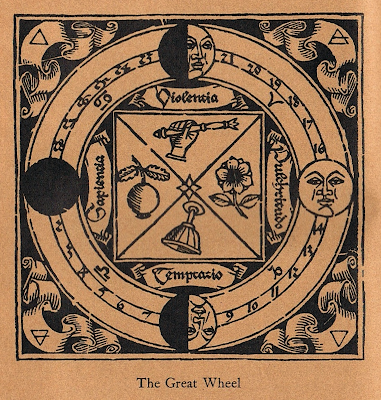 The Great Wheel of A Vision A, printed on brown paper,
tipped into the book on [p. xiv].

The Great Wheel that appears opposite p. xv in A Vision A is one of the enduring images that most readers retain of A Vision, an archaic woodcut that hints at symbolic meanings, some of which are never quite explored in the book itself. Yeats gave Edmund Dulac both guidance and latitude in his instructions for the design, trusting him as a personal friend, who shared many of his own esoteric interests, particularly astrology. He had already asked Dulac to make a picture of Giraldus, his putative author of Speculum Angelorum et Hominum in Cracow,  and in thanking Dulac for the portrait he outlined his requirements for a diagram, supposedly from this Speculum, in October 1923:

The portrait of Gyraldus is admirable. I enclose the sketch for the diagram. The pencilled words will have to be in Latin & I will get the Latin I hope tomorrow. The man I count on for it was out yesterday. You can use any symbolism you like for the elements—nymphs, salamanders, air spirits, or Roman gods or more natural objects.…

The round objects in the enclosed diagram are of course the lunar phases 1. 8. 15. 22 making new moon, half moon, full moon & half moon respectively. They will be nasty things to draw but your Kracow artist would not have drawn them very carefully. I can give the Speculum what date you please.…

I do not think that the sketch is extant, but its general outline is probably fairly close to the final picture, except in a few details. There are five elements to the final design: (1) the elemental attributions in the corners, (2) the circle of the moon's phases, (3) the zodiacal symbols, (4) the words designating the key phases, and (5) the central motifs.

- (1) Yeats's sketch must have indicated the placing of the elements, whether by word or symbol and, though he may have hoped for something a little more exuberant and elaborate, Dulac uses just the simple symbols for the four elements, placed on furled banners. 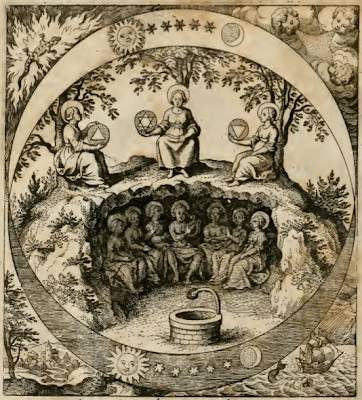 The kind of picture Yeats was originally thinking of?
Note the elemental corners, which have the same arrangement as that of A Vision. These surround a ring depicting sun and moon formed by two intersecting circles, one dark and one light.
Frontispiece of Musaeum Hermeticum (Frankfurt, 1625).

- (2) The "round objects" might not have been entirely self-explanatory, except that Dulac had no doubt been told about the 28 phases of the moon—everybody else seems to have been—so Yeats could therefore comment that they were "of course the lunar phases 1. 8. 15. 22" (I am using John Kelly's transcription, rather than Wade's; the other letters are drawn from Diana Hobby's unpublished thesis, "William Butler Yeats and Edmund Dulac, a Correspondence: 1916–1938" [Rice University, 1981]).

- (3) The zodiac signs are not mentioned but were almost certainly in the diagram as they were in most iterations of the schema in the notes and drafts, though Yeats was still unclear about their significance and later had doubts about their placing. 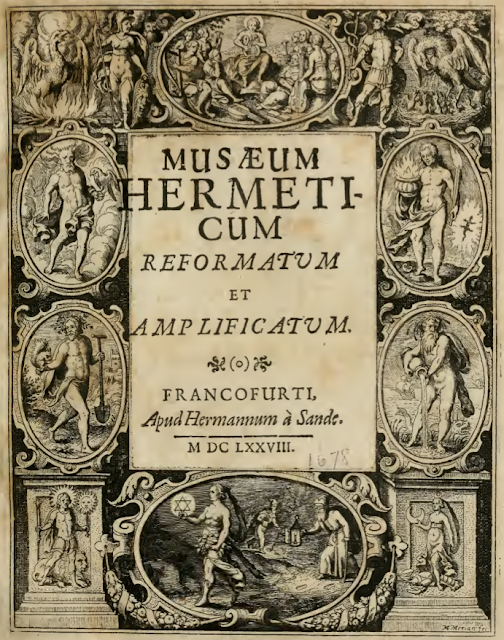 The kind of picture Yeats was originally thinking of?
Classical figures symbolize the elements on either side of the title (clockwise from upper left: Jupiter - Air; Prometheus – Fire; River god [?Nile] – Water; [?]Autumnus – Earth).
Above, Phoenix and Minerva, on the left, and Pelican and Mercury, on the right,  flank Apollo with the Nine Muses. Below, the sun, with a lion (Leo), and the moon, with a crayfish (Cancer), flank an emblem of Nature, holding the light of perfection, followed by short-sighted researchers with lanterns.
Engraved title page of Musaeum Hermeticum revised (Frankfurt, 1678), by Matthäus Merian.

- (4) The "pencilled words" must have been the English—Beauty (15), Wisdom (1), Temptation (8) and, probably, Power (22)—and a little over a week later Yeats sent on the Latin that he had been given by Louis C. Purser, a distinguished classicist at Trinity College, Dublin: "put Pulchritudo at 15, Sapientia at 1, Tentatio at 8 and Dominatio (or Potestas) at 22. I enclose Purser's letter as his spelling may correct mine" (October 23, [1923]). There are two points of variance from the words Yeats gives, the minor one of "Temptatio" and the major one of "Violentia" rather than "Dominatio". The first may reflect Purser's spelling or Dulac's preference to avoid a spelling that looked more like his native French. "Violentia" is stranger and less readily explicable, but there was plenty of time for Yeats to modify his ideas, since it was over a year and a half before Dulac sent the design to him (see below). 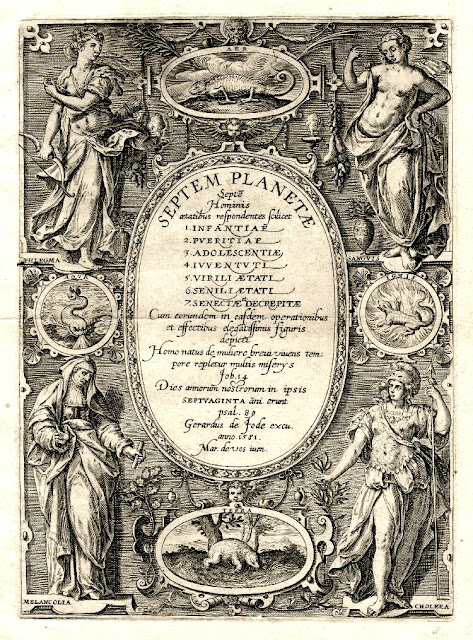 
- (5) The emblems at the centre of the diagram seem to have been Dulac's own idea. Yeats had sent him a draft of the introductory material when he requested the portrait of Giraldus—"I send you my preface, in the rough, or rather Owen Aherne's. It will give you all the facts as I see them" (July 26, [1923]). This typescript spoke of a design where "the zodiacal signs were arranged in a circle with a unicorn in the center, while in the corners of the diagram <cancelled words> Biblical symbols", which Dulac seems to have realized only rather late in the day:

Herewith the Diagram. When it was done I remembered in that your description of it you mention that the square in the center is occupied by a design of a unicorn. Thence the accompanying design of the Animal in question. If it is not absolutely necessary that the Diagram should incorporate it leave it as it is, but if its presence in the Diagram is of vital importance, the engraver can make the two blocks and fit that of the Unicorn in its proper place for the purposes of printing. Otherwise it may be used as a tail piece somewhere else in the book. (April 30, 1925; LTWBY2 462)

The animal in question did indeed appear as a tail piece to the poem, "The Phases of the Moon", pasted in at the end. 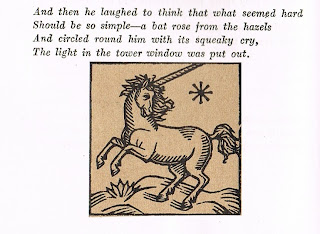 If the designs were, however, Dulac's idea, Yeats was happy to incorporate them—"The designs are exactly right. 'The Wheel' could take in the whole British Museum" (May 5, [1925]). He changed the introduction so that the "lunar phases and zodiacal signs were mixed with various unintelligible symbols—an apple, an acorn, a cup" (AVA xviii), and later noted that "The East, in my symbolism … is always human power" adding as explanation that "In the decorative diagram from the Speculum Angelorum et Hominum … the East is marked by a sceptre" (AVB 257–58).

As this indicates, the emblems do logically express the words Yeats had given, at least to some extent: Beauty – a flower, plausibly; Wisdom – a fruit, possibly; Temptation – a cup, possibly too; Power – a sceptre, certainly. But they also show kinship with traditional playing card suits. Though the English-speaking world tends to use the suits of French origin—spades, hearts, diamonds and clubs—the rest of Europe draws on similar but different symbols.

Dulac's flower has definite similarities with the Swiss one, while the fruit seems to have the idea of the acorn mixed with the shape of the bell from Swiss and German iconography and may explain why Yeats refers to an acorn AND and an apple. The cup and sceptre are more clearly linked with the traditional Italian suits—denari, coppe, spade, bastoni—emblems which are also retained in the Tarot cards. Certainly this was in keeping with Yeats's own thought and the early drafts of the Arabian fictions outlined in A Vision A, indicate that "the four suits of the Tarot, the King, the Queen, the Knight & the Knaves should really be King, Queen, Prince & Princes, & were derived through the Saracens from the dance, & … these cards have in turn given birth to our common court cards" (YVP4 153).

In the end, however, what kind of picture was Yeats originally thinking of? He was willing to shift the date from the late sixteenth century to earlier, but he does seem to have conceived of a later, slightly more refined style than he was finally given by Dulac, although the style was clear and agreed on once he had the portrait of Giraldus. Of the illustrations above, one is before the date of 1594 that he gave and the other is other is after it, but both are rather more elaborate than the style that Dulac created. At that date, the woodblock style is more generally used for illustrations inserted into the text, while the finer lines and greater detail of engraving are used for full-page illustrations. It seems possible that Yeats had originally conceived of a more clearly sixteenth-century look, and also that the design would centre on a unicorn—symbol of the Daimon, or of the soul. Might he have been thinking of something more like this? 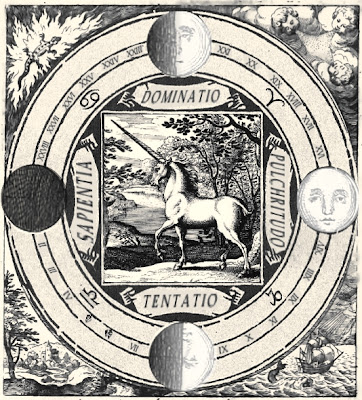 Happy to see this site.

When you write that the symbol of fruit meant wisdom "possibly," I think you are correct. I'm remembering a poem of Yeats's that is not included in the official Collected Poems, "Wisdom and Dreams," "Wisdom and dreams are one / And dreams are flowers ablow / And wisdom the fruit of the garden / God planted him long ago."
Thanks for making this site.

Thank you very much for your comment. The lyric you quote is a lovely example of early Yeats, and also an example of how much "A Vision" draws on themes that had been present in Yeats's work for decades.

A quick note to let you know that I greatly enjoy your blog.
Peter

Thanks for that -- it's always good to hear that someone enjoys reading it!