The Square Wheel and Chessboards

It shouldn’t be surprising that the Great Wheel of A Vision has some characteristics that seem to fit rather well with a square format rather than the more familiar circular one. 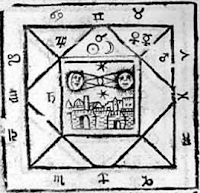 Fanti, Triompho di Fortuna (1526)
When W. B. Yeats drew up a quick chart of the heavens, either for a person’s horoscope or to cast a horary chart, he usually used the traditional square horoscope, which he’d probably learnt from his astrological uncle, George Pollexfen. (I remember reading some years ago that Cyril Fagan, a distinguished Irish astrologer, had commented that Yeats was one of the last to use this old-fashioned format, and I was very dubious. I later saw the evidence of it for myself throughout his notebooks but now have no idea where that reference was, despite some desultory searching.)

Horoscope in Yeats's hand
Certainly his wife, George, from a younger generation—and probably more accustomed to using printed blanks—always used a circular layout. And that is the layout that dominates throughout the automatic script. Even when the spirits were taking control, their scrawls are almost always based on circular forms.

Yet certain features of the system lend themselves readily to a square format. For now I’ll limit myself to the two most fundamental and practical. 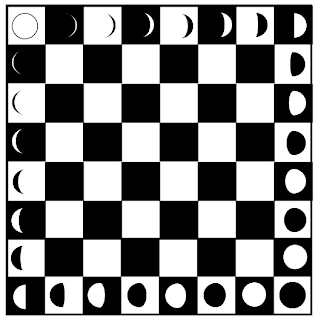 The first and most obvious one is that a standard chessboard, with eight squares on each side, has a perimeter of twenty-eight squares. Yeats actually states that "the individual phases are alternately primary and antithetical" (AVB 88), and here we have the alternating squares of black and white (and, as with Yeats’s comment, this does lead to the slightly odd situation of Phases 1 and 15 being the same).

It’s probably best to put the square on point, so that it can be seen in the same orientation as normal presentation of the Wheel in A Vision. 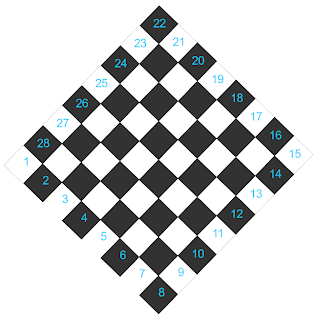 The second feature, that is probably the most interesting in some respects, although one which the Yeatses themselves don’t seem to have used, is the way that the square format helps the mapping of the twenty-eight phases onto the twelve months or signs of the Zodiac. 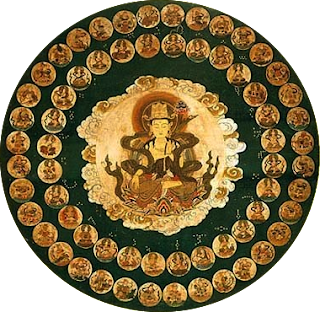 Mandala of 36 decanates and 28 mansions

While 28 does not map easily onto to 12, if you place another row of squares along each side of the chessboard so that it is ten squares on each side, it has a perimeter of 36 squares, easily mapped onto a twelvefold scheme, with three squares for each twelfth. The division of the months into three periods of roughly ten days each may seem a little arbitrary, though it has good calendrical precedent as far back as ancient Egypt. 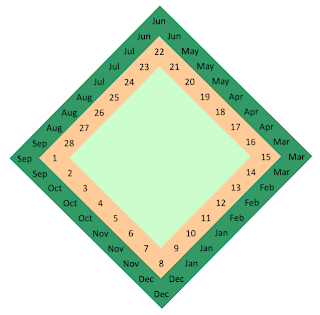 The diagram here takes the correspondences sketched out in "The Completed Symbol", Section VI, with March aligned with the Full Moon and September aligned with the New Moon and both phases and calendar proceeding anti-clockwise. Whereas Yeats comments "There is no reason why March, June, etc., should have one Phase, all others three; it is classification not symbolism" (AVB 196), here it is simply logical that the corner or cardinal phases should have a month or sign apiece.

It is also worth remembering that the Zodiac has long been divided into 36 decanates, divisions of 10˚ each, so that each sign has three sectors. 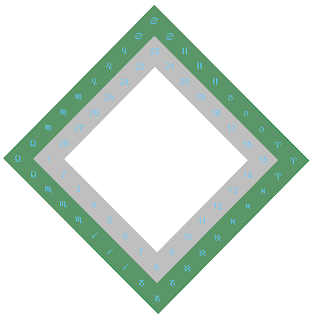 Square of 36 decanates and 28 phases

The correspondences here are those sketched out applied to the Zodiac rather than the months, so with Aries aligned with the Full Moon and Libra aligned with the New Moon, though Yeats actually places "the Ides of March, at the full moon in March" with "the Vernal Equinox, symbolical of the first degree of Aries, the first day of our symbolical or ideal year", so we'll need to look at the fine tuning beyond the broad principle shortly.

While we are about it, it is also worth considering that the central space is made up of four squares, surrounded by twelve squares, then twenty and then twenty-eight. The four and the twelve have relatively obvious applications (the inner Zodiac here is the one that corresponds with the phases during the afterlife, see AVB 223). 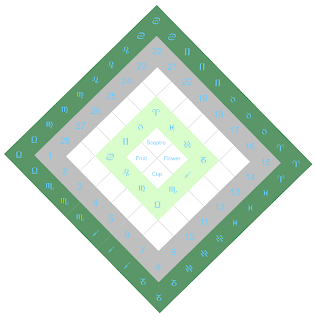 click on any of the images for a larger, more legible version

We'll come back to these boards again soon, since there are dimensions that touch on chess, both regular and Enochian, tarot and the I Ching, all of which are worth exploring in greater depth. 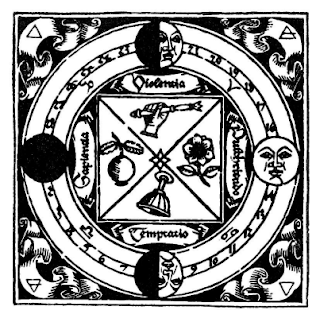 This blog is intended as a companion to my website about A Vision, YeatsVision.com, and both examine the esoteric system created by William Butler Yeats and his wife, George Hyde Lees. Whereas the website aims to offer clear and direct interpretation of A Vision for readers and students, confining itself largely to what Yeats himself wrote and to the academic study of his work, the comments and articles here will be rather more speculative, exploratory and possibly personal. I also hope that as and when people arrive they will feel able to enter into some dialogue about topics through the comments.

I will be adding to the blog very slowly, but since it is far from topical and will only be minimally sequential, I hope that readers will feel able and welcome to respond to any post, whether it was nominally put up the day before or months or even years before—this kind of web dialogue can be both instant and leisurely. Like Yeats, I recognize that most of the material here will not be of great general interest and is for the relatively small group of “my fellow students” of A Vision, but I know myself from the way that a search-engine or a link leads to unexpected places, there will be some people who stumble onto this without knowing much about what’s going on. If you are in doubt or are intrigued, do go and look at YeatsVision.com (especially Overview) for simpler and more straightforward explanation of the material.